It’s a new year! I’m going Big Time! My biggest news is that I’ve become a for-realsies Comic Book Reviewer thanks to the good people at Comics: the Gathering.

No, I ain’t making scratch at the gig. So maybe I ain’t quite Big Time. More like Slightly Less Small Time. Still! Progress! I might well be on the same career path that put Kelly Thompson into the Mighty Marvel Bullpen! (Ask me about my spec script …)

Phoenix: The Resurrection of Jean Grey #1

Guardians of the Galaxy #150
END_OF_DOCUMENT_TOKEN_TO_BE_REPLACED

Becky Cloonan’s Punisher: Not a writeoff. David Walker’s Occupy: Going out with a bang.

Let’s face it: Comics are a many-curse-words expensive hobby. Marvel has been 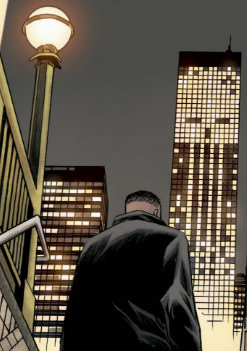 particularly shameless about cash-grabbery in recent years, featuring lots of too-big events (Yeah, we’re just dying to know what Jim ☠☠☠☠ Hammond is up to during Secret Empire!), constant cash-in miniserieses (You like Daredevil? Buy these three poorly-conceived solo titles featuring Daredevil villains!), and way too much double shipping (You like Gerry Duggan’s Guardians of the Galaxy? Do you like it enough to drop $8 a month on it? No? ☠☠☠☠ you, no more Guardians for anybody!).

END_OF_DOCUMENT_TOKEN_TO_BE_REPLACED

The roundup is late, the comics are still great.

This blog has been running silent for too long. I was working through – let’s just say “general stuff.” The good news is I’ve been reading plenty of comics, enjoying most of what I read, and taking plenty of notes. So I’ll bring this up to date quick-like. Let’s get to work on this backlog with some great U.S. Avengers, some thoughtful Sam Wilson, and some imaginative Mosaic.

Check out the full roster over at Marvel.com, then follow through the jump for my ratings.

Oh no, oh no, I’m late! This is my round-up for Marvel Unlimited comics published last week. There was so much stuff to get through that it took me too long, plus life nonsense in the way.

This was the week of the twist ending in our new MU comics. Five of the books below have major final-page surprises, and I think I only spoiled one of them. (Sorry, Wolverine fans!) Take a gander at the full release calendar and then meet me below the excited Loki to talk comics.

If you’re wondering about Avengers 3.1, don’t worry – it got delayed for some reason and was added to MU today. I’ll include it in the next round-up.

Maybe I should just send this love letter straight to Al Ewing?

Politics in comics! Would you rather have the possibly naive optimism of the U.S.Avengers or the crass “everyone is awful” humor of Captain America: Sam Wilson? Since I’ve rated the former as my favorite comic of the week and shoved the latter to the bottom of my satisfactory comics section, you can guess where I stand. I say it’s nobler and more useful to inspire empathy than to heap scorn, particularly when your object of ridicule is a strawman of your own invention. Comics are about punching bad guys first and foremost. Mission number two should be reminding us to be awesome, not encouraging us to be negative. This was a pretty light week for new Marvel Unlimited additions, with just 16 new books plus a lonely (and pretty skippable) Deadpool one-shot from the 90s. Check out the release calendar and then hit the jump for my ratings.

Here I am, reviewing this week’s latest additions to Marvel Unlimited with hours, hours to spare before Monday brings a whole new batch. The biggest news of the week, of course, is that our long comics-reading nightmare is over: Civil War II is safely dead and buried. Lord, it was a stinker. With luck, we shall not see its like again. While CW2 #8 wasn’t the only disappointing comic this week (incredibly, it wasn’t even the worst issue), this was a very strong week for MU overall. My ratings skewed heavily toward four and five stars. Get to know a wounded Jennifer Walters, fall in love with an ingenious Hobie Brown, and look at a disturbingly emotional argument in favor of mutants over Inhumans for IvX. Check out the full release calendar and then click through for my rankings.

END_OF_DOCUMENT_TOKEN_TO_BE_REPLACED

This was a busy week for me and for Marvel, apparently. It took me over a week to chew through this big block of contemporary additions to Marvel Unlimited. It’s a very good week for Gwens Poole and Stacy, and further down the quality totem pole Felicia “Black Cat” Hardy is experiencing a little fatigue in her continued role as the Marvel universe’s go-to organized crime villain. Take a gander at the full release schedule, then meet me underneath the sweet Gwenpool picture to talk individual comics.

END_OF_DOCUMENT_TOKEN_TO_BE_REPLACED

Ben Grimm and way too much Foom.

Number of Fin Fang Foom appearances this week: 2/3. (It’s three if you count the stories in the Gwenpool special separately.) Was 2016 the year of the ☠☠☠☠-ing dragon or what?

Peep the full list here, then strap in for a ratings rundown.

END_OF_DOCUMENT_TOKEN_TO_BE_REPLACED

A racially-sensitive trip to Harlem ends up still being sorta racist.

This issue presents the fifth appearance of Sam Wilson. The first four all came in a longer story that introduced him and turned him into the Falcon, so this is his first real non-origin adventure. It’s a speedy thrill ride and a racially-complicated visit to Harlem. It’s Captain America shutting up and punching bad guys and then being a little patronizing. It’s Sam Wilson’s first shot at putting on the Captain America uniform, way way earlier than you thought he did. It’s another Cap flashback with tricky racial implications. All this and Redwing, too! END_OF_DOCUMENT_TOKEN_TO_BE_REPLACED

Cheap attention-grabber or respectful celebration? Baby we can do both!

Eight months after Neil Armstrong and Buzz Aldrin (and Michael Collins and several thousand NASA geeks) wowed the world with a real-life moon landing, the Marvel Bullpen feels it’s time to tell the story of how the Fantastic Four helped make it happen. Treading the line between celebration and exploitation with exquisite care, Mr. Lee and Mr. Kirby reveal that that one small step couldn’t have been taken without a wham-bam robot fight being won back on Earth. END_OF_DOCUMENT_TOKEN_TO_BE_REPLACED